Some Icicles commands that allow for multi-completion input, ignore your current choices of ‘TAB’ and ‘S-TAB’ completion method.

In particular, this is the case for commands ‘icicle-file’ and ‘icicle-buffer’ and similar. Such commands have their own way of matching the multi-completion parts.

If you want to use alternative completion methods for completion of file and buffer names then use a different command. In that case, consider customizing option ‘icicle-top-level-key-bindings’ to remove the default key bindings for such commands.

In vanilla Emacs there is only one set of completion styles that is ever in effect, defined by option ‘completion-styles’. It is a list of different ways to match your input. Each style in the list is tried, in turn, until one of them successfully completes your input.

All completion candidates you see come from the same style. You have no control over which style will actually be used for any given input, other than ordering the list ahead of time. And you have no way of knowing which style was actually used to produce a given set of candidates. The relation between your input pattern and the matches is thus sometimes not so clear. There is no way to know, for example, that initial matching failed and partial matching succeeded.

In vanilla Emacs the styles of ‘completion-styles’ can only be used together – all or none; they are never alternatives that you can choose at runtime.

Icicles completion methods are instead alternatives – only one is used at a time to complete your input, and you can switch from one method to another easily. For prefix completion (‘TAB’) you switch methods using `C-(’. For apropos completion you switch using `M-(’.

When you choose Icicles prefix completion method ‘vanilla’ you get essentially the behavior of vanilla Emacs completion, that is, completion according to a list of styles, which are tried one after the other.

And just as it is quick and easy to flip, during completion, from one Icicles completion method to another (using `C-(’ or `M-(’), so it is with the completion style sets of method ‘vanilla’. For the duration of the current command, you can change to the next style set using `C-M-(’ (command ‘icicle-next-completion-style-set’).

Among other things, this means that you can try completing using one style set and, if that does not succeed, switch to another. Any of the sets in ‘icicle-completion-style-sets’ can contain any number of styles, in any order. In particular, a set can be a singleton, which means that you can selectively try to complete using different individual styles.

Completion method ‘vanilla’ is the only method that is subdivided into styles.

By default, the prefix completion methods (‘TAB’) include ‘vanilla’ (see Prefix Completion Method `vanilla'), ‘basic’ (which is the same as vanilla completion style ‘basic’), and the following methods, which provide different kinds of what might be called “fuzzy” matching:

By default, the apropos completion methods (‘S-TAB’) include ‘apropos’ (regexp matching) and the following methods, which also provide different kinds of what might be called “fuzzy” matching. See Fuzzy Completion for further descriptions of each.

If you have your own method of matching then you can use that too, by adding it to option ‘icicle-S-TAB-completion-methods-alist’ for use by ‘S-TAB’.

My own opinion about the relative usefulness of the various completion methods, in order from the most useful: ‘apropos’, ‘basic’, ‘vanilla’, ‘scatter’, ‘SPC scatter’, ‘fuzzy’, ‘Levenshtein’, ‘Jaro-Winkler’, and ‘swank’. YMMV.

You can change completion methods easily at any time, by hitting a key in the minibuffer:

Repeating `C-(’ and ‘TAB’ or `M-(’ and ‘S-TAB’ on the fly for the same input can be a good way to learn the differences between the various completion methods.

If you provide a prefix argument to `C-(’ or `M-(’, then the newly chosen method is used only for the current command. More precisely, the previously active method is restored as soon as you return to the top level.

Sometimes you might want to make a different set of completion methods available during input. You can use options `icicle-TAB-completion-methods-per-command’ and `icicle-S-TAB-completion-methods-per-command’ to do this. These define the methods to be made available during specific commands that read input with completion. That is, they give you command-specific control over `C-(’ and `M-(’.

For example, the following interaction sets the available ‘TAB’ methods for command ‘icicle-read-color-WYSIWYG’ to fuzzy and basic:

Fuzzy will be the default method for this command, since it is first.

And the following interaction removes the special treatment for `C-(’ during ‘icicle-read-color-WYSIWYG’, restoring the default ‘TAB’ methods that are defined by option ‘icicle-TAB-completion-methods’:

This section presents details about the Icicles completion methods that might be called “fuzzy”.

What this really amounts to is matching input ‘abc’ as if it were the regexp `a.*b.*c’. That’s all.

You can use Icicles scatter matching in place of apropos (regexp) matching. Unlike the cases of swank and fuzzy-match completion (see below), you can use it to complete file names also.

This is the method that library Ivy uses for its “fuzzy” matching.

Library el-swank-fuzzy.el is required for Icicles to use fuzzy-symbol completion.

If you choose ‘swank’ ‘TAB’ completion, what you get in Icicles is fuzzy-match completion, but only for symbols. Symbols are completed using the algorithm of el-swank-fuzzy.el. See that library for details.

Icicles options `icicle-swank-timeout’ and `icicle-swank-prefix-length’ give you some control over the behavior. When the ‘TAB’ completion method is ‘swank’, you can use ‘C-x 1’ (`icicle-doremi-increment-swank-timeout+’) and ‘C-x 2’ (`icicle-doremi-increment-swank-prefix-length+’) in the minibuffer to increment these options on the fly using the arrow keys ‘up’ and ‘down’.

Swank symbol completion uses heuristics that relate to supposedly typical patterns found in symbol names. It also uses a timeout that can limit the number of matches. It is generally quite a bit slower than fuzzy completion, and it sometimes does not provide all candidates that you might think should match, even when all of your input is a prefix (or even when it is already complete!).

If swank completion produces no match when you think it should, remember that you can use `C-(’ on the fly to change the completion method.

I do not necessarily recommend swank symbol completion, but it is available for those who appreciate it.

Like fuzzy-match completion, swank completion always sorts candidate symbols according to its own scoring, putting what it thinks are the best matches first. This means that using `C-,’ in the minibuffer to sort candidates differently has no effect.

Library fuzzy-match.el is required for Icicles to use fuzzy-match completion.

Here are some examples:

The last example shows that although ‘fuzzy’ completion is a kind of prefix completion, your input is not necessarily a prefix of each matching candidate. It tries to match your input starting at its beginning. This input prefix is matched against candidate substrings, not necessarily candidate prefixes, but the non-matching part (if any) preceding the matched substring must not be longer than the matching part. That is, non-matching substrings can be skipped over, but they must be no longer than the matching substrings that follow them. If an input prefix does not match under these conditions, it is skipped over.

After matching an input prefix this way, the same process is repeated, recursively, for input text following that prefix and for match positions following the matches found. That is, after each such prefix match, the process starts again where it left off in both the input and the candidates. The resulting matches contain one or more substrings of your input that are each at least as long as the non-matching parts that immediately precede them. Only matches with the highest number of matching characters are retained. They are sorted by two criteria: (1) nearness of matches to the start of the candidate and (2) candidate length.

The fuzzy-match algorithm is detailed in library fuzzy-match.el. However, it is easier to get a feel for what it does by trying it than by reading any description. Just give it a try. Do not expect it to rival apropos completion in power or expressivity, however. Instead, think of it as prefix completion for lazy or inaccurate typists! If that sounds like you, then you might find it useful. ;-) 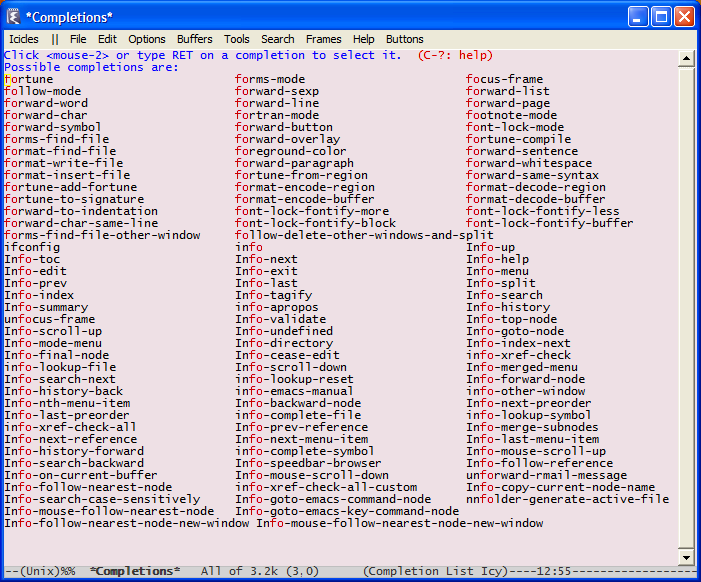 The first thing to notice is the distribution of candidates for input ‘fo’. Candidates are in decreasing order of match fit:

The second thing to notice is that when you type the third input character, ‘l’, the candidates are not a subset of the original set that matches ‘fo’. The candidates in the second screenshot all match ‘fol’ in a fuzzy way, even though one of them, ‘mh-folder-mode’, does not match ‘fo’ sufficiently well to be included as a candidate. Why? Because in the ‘fo’ case, the match is only two characters long and it starts after three non-matching characters.

Refer to fuzzy-match.el for a precise description of fuzzy matching. It refers to “matchiness” for how many characters match and “closeness” for the ratio of number of characters matched to candidate length.

Note: It is not practical to try to highlight the exact candidate portions that match different parts of your input. Because fuzzy-match input does not function as a literal string for matching purposes, it is more akin to substring matching than to basic prefix matching. For this reason, regexp-match highlighting is used for fuzzy matching. That is why you see the input ‘fo’ highlighted in ‘*Completions*’ candidates in other than just the prefix position. It is also why the matching ‘f’ and ‘o’ in candidate ‘ifconfig’ are not highlighted: for highlighting purposes, your input is treated as a regexp.

One takeaway here is that fuzzy-match completion is complicated. Rather than try to understand how it works and think ahead in those terms, you just need to get a feel for it – learn by doing. Have fun!

Library levenshtein.el is required for Icicles to use Levenshtein completion.

When this kind of ‘S-TAB’ completion is used, Icicles considers your input to match a completion candidate if their Levenshtein distance is no greater than the value of option `icicle-levenshtein-distance’. The default value of the option is 1, meaning that the difference is at most one character operation.

Using a strict definition of the distance, this also requires the length of your input to be within the Levenshtein distance of the length of a completion candidate, for it to match. That is quite restrictive.

When you cycle among ‘S-TAB’ completion methods using `M-(’, there are thus two choices for Levenshtein completion: ‘Levenshtein’ and ‘Levenshtein strict’. The former is generally more useful.

The larger the value of ‘icicle-levenshtein-distance’, the slower Levenshtein completion becomes, since it must test more possibilities. Also, when the value is 1 (except for `Levenshtein strict’), Icicles uses a fast, special-case algorithm, and it highlights the matching parts of candidates in buffer ‘*Completions*’. 1 is the most useful value.

If the value is other than 1 (or if it is 1 with ‘Levenshtein strict’), then you must also use library levenshtein.el, and Levenshtein completion can be quite slow. In that case, you will no doubt want to turn off incremental completion (`C-#’).

Library fuzzy.el, from package ‘auto-complete’, is required for Icicles to use Jaro-Winkler completion.

The Jaro-Winkler ‘S-TAB’ completion method was originally developed for comparing names for the U.S. census. It tends to take into account some typical spelling mistakes, and it is best suited for use with short candidates.

When checking whether two strings match, higher matching weight results when there are more characters in each string that are also present in the other, and in approximately the same positions.

The Winkler part of the method comes from giving additional weight for prefixes that match exactly. The longer the exact prefix match (up to 4 characters) the greater the weight.

Unlike the other matching methods, for Jaro-Winkler to complete your input it must have the same number of characters as the candidate to be matched, plus or minus two (actually ‘fuzzy-accept-length-difference’). In particular, this means that you cannot hit ‘S-TAB’ with an empty minibuffer to see all of the candidates.