In buffer ‘*Completions*’, you can use the arrow keys (‘down’, ‘up’, ‘right’, ‘left’) to navigate among the candidate completions. The current candidate (under the cursor) is highlighted.

When you cycle completion candidates in the minibuffer:

The mode line of buffer ‘*Completions*’ shows information about the current completion state, in order from the left:

Switch to *Completions* and Back to Minibuffer

You can choose multiple candidates during completion, by clicking them with ‘mouse-2’ while holding the Control key pressed. See Icicles - Multi-Commands. You can choose a set of candidates in additional ways, and then act on all of them – see Icicles - Candidate Sets).

Icicles dynamically resizes the ‘*Completions*’ window vertically, to fit the current set of completion candidates. The window is not resized, however, if buffer ‘*Completions*’ appears in its own frame. (It is also not resized in Emacs releases prior to 21.) You can control this automatic resizing generally or on a per-command basis:

Starting with Emacs 23, if you also use DoReMi library doremi-frm.el, then you can use ‘C-x -’ in the minibuffer to zoom the ‘*Completions*’ buffer text, shrinking or enlarging it incrementally using ‘-’ or `=’, respectively (`=’ is typically on the same keyboard key as `+’, but it needs no Shift).

Also starting with Emacs 23 (whether or not you use doremi-frm.el), you can specify an initial text-scale amount for the ‘*Completions*’ text, by customizing option `icicle-Completions-text-scale-decrease’. This controls the default appearance. (The option has no effect for terminal Emacs. It is used only for graphic display (GUI Emacs).

You typically use these features to make the ‘*Completions*’ text a bit smaller and thus save screen real estate – show more candidates in less space. However, Emacs 23 text-scaling does not by itself let you recuperate the saved window space – it shrinks the text, but it does not shrink the window accordingly. For that, you also need library face-remap+.el and its option ‘text-scale-resize-window’, which lets you resize the window or not, horizontally, vertically, or in both directions.

(For example, you might set ‘split-width-threshold’ to a small number, so ‘*Completions*’ appears on the side rather than above or below other windows, and in that case you might want to resize it only horizontally.)

If you use library oneonone.el with a standalone ‘*Completions*’ frame, then see option ‘1on1-completions-frame-zoom-font-difference’.

Change *Completions* Spacing and Columns On the Fly

Icicles varies the number of columns used to display completion candidates, for a better fit. You can tweak this with options `icicle-candidate-width-factor’ and `icicle-inter-candidates-min-spaces’.

If you use DoReMi (library doremi.el), then you can modify these options incrementally during completion, seeing the effect as they change. Use ‘C-x w’ or `C-x |’ from the minibuffer, then use the arrow keys or the mouse wheel to increment and decrement the current value. WYSIWYG.

Why is this important enough to merit changing it dynamically, instead of just customizing the options once and for all? Because different sets of candidates have different candidate lengths and distributions of those lengths. Play with it a bit and you will see. One size does not fit all in an ideal way.

(You can use option `icicle-Completions-max-columns’ to prevent Icicles from automatically calculating the number of columns to display, but I do not recommend this.)

You can use `C-x .’ (‘icicle-toggle-hiding-common-match’) in the minibuffer at any time during completion to toggle hiding of the matched portions of the candidates in ‘*Completions*’. This portion is replaced by ellipsis, `...’. (In Emacs 20, it is replaced by nothing.)

This can be useful when you do not care about the text that matches or when that text is particularly long. For example, if you use ‘icicle-find-file-absolute’ (‘C-u C-x C-f’) and the completion candidates are absolute file names that share a common directory, it can be convenient to hide the directory portion that is common to all candidates.

Starting with Emacs 22, if option `icicle-image-files-in-Completions’ is non-‘nil’ (it is ‘t’ by default) then thumbnail images are shown in ‘*Completions*’ for candidates that are either (relative or absolute) names of image files or names of image-file bookmarks (see Bookmark+). If the option value is ‘image-only’, then only the thumbnail images are shown. If it is otherwise non-‘nil’ then the file names are also shown. You can cycle the option value using ‘C-x t’ in the minibuffer at any time during completion.

However, thumbnail tooltip previews are not shown if thumbnails are already shown in ‘*Completions*’, that is, if option `icicle-image-files-in-Completions’ is non-‘nil’ and ‘icicle-image-preview-in-tooltip’ is not ‘full’.

You can lay completion candidates out vertically, if you like, instead of horizontally (the default). To do that, customize option `icicle-completions-format’ to have the value ‘vertical’.

You can toggle the completions layout between horizontal and vertical at any time during completion, using `C-M-^’.

Unlike the case for vanilla Emacs, in Icicles the arrow keys in buffer ‘*Completions*’ correctly reflect the candidate order (e.g. as currently sorted). This also means that candidate cycling acts properly for a vertical layout.

The inclusion of proxy candidates is controlled by user option `icicle-add-proxy-candidates-flag’. You can toggle this inclusion at any time during completion, using `C-M-_’. For performance reasons, you must re-invoke some commands after toggling the flag on, to make the proxy candidates available. Examples:

See Also: Variable Value as Input for information about using `C-M-{’ in the minibuffer to retrieve the value of any variable as minibuffer input.

Proxy Gotcha #1: Your minibuffer input is matched against proxy candidates, as usual. If ‘insert-default-directory’ is non-‘nil’ when you use ‘C-x d’ (‘icicle-dired’), then the default directory is inserted as part of your input. If you use ‘TAB’ for completion then you will first need to use ‘M-k’ to remove the inserted directory, as it will not match any of the proxy candidates.

Proxy Gotcha #2: If you enter text that matches a proxy candidate then the value of that proxy is taken as the real input – that’s the whole point of proxy candidates. But suppose, in Info, you want to (non-incrementally) search for the text ‘ftp-program’, which is the name of a variable? If you type ‘s ftp-program RET’ then the value of that variable (typically ‘ftp’) is taken as the text to search for, instead of the literal text ‘ftp-program’. To take care of this, use `C-M-_’ in the minibuffer to turn off including proxy candidates.

Clicking ‘C-mouse-3’ on a candidate in ‘*Completions*’ pops up a contextual menu for acting on completion candidates. You can customize the menu using option `icicle-Completions-mouse-3-menu-entries’. By default, the menu has the following submenus:

The popup menu is contextual. In particular, the available items can change depending on whether you use a prefix argument (‘C-u C-mouse-3’) and whether you have selected candidates using the region (e.g. mouse drag). The menu also provides a good reminder of key bindings available during completion.

Screenshots of the popup menu and its submenus are here: Completion menu.

There are lots more Icicles features that enhance the display and behavior of ‘*Completions*’ in some way. Read on…

Here is a screenshot of buffer ‘*Completions*’ (shown in its own frame): 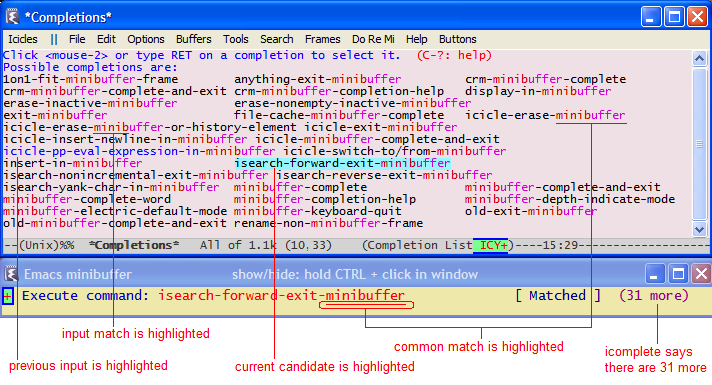 (Mode-line help is not shown in this screenshot, which is older than that help feature.)