I have found out that in order to use this hack you will need to have VisualStudio 6 installed. I know, sounds crazy but that is how it seems to be. Read on below in the discussion for details.

About the name: yes, it should probably be called w32-send-mail-from-mail-buffer-using-vbscript-and-mapi.el…

Thought I’d give it a try, since I too use Outlook (2000). I got a Windows error message: “Could not find MAPI. Exiting...” Makes sense, I guess, since I use IMAP. So I guess this won’t help me if it depends on MAPI. It might help others, though, if you were to point to some info about MAPI and wscript.exe. – DrewAdams

Hmm, that is strange… I did not know that you could have Outlook and not have MAPI. MAPI is a general API for accessing MUAs under Microsoft Windows. I don’t think having MAPI has anything to do with using IMAP, IMAP is the way your MUA access the e-mails at the server, MAPI is for programs wanting to access your default MUA. – MaDa

I know next to nothing about this stuff. I mentioned IMAP vs MAPI only from having googled and read (probably misread) some stuff about configuring MAPI for Exchange (which I don’t use). I was perhaps thrown off because of this (from the wikipedia page you cite): “MAPI refers both to the application programming interface as well as the proprietary protocol which Microsoft Outlook uses to communicate with Microsoft Exchange.” No doubt, some of the Google hits were referring to the latter meaning.

Any ideas about the error message I got? Googling for MAPI seemed to suggest that perhaps this doesn’t work with XP SP2 (which is what I use), but it wasn’t clear to me. Suggestions welcome. Any idea what to check for before your library can be used, or how to provide those prerequisites? – DrewAdams

The long story: Lennart pointed me in the direction of an ActiveX control called msmapi32.ocx. I have this on the PC where I developed this little hack. This control exposes needed MAPI methods to the COM system and this is what makes it possible to send mail from VBScript. So I thought, why not just copy this file and register it, to those machines that does not have VS6? Turns out it isn’t that easy… When I do this I get another error message than before, I get told that I haven’t got a license to use this ocx. On machines that have VS6, one has this license because VS6 adds this when it is installed. So how can things built using this ocx ever work? My theory is that if you build an exe or another control etc, than this licence is somehow bakes into that, so that it will run. That was the long and complicated story, and it feels really bad that only a few people will be able to use this. I will put a warning at the top if this page…

Thanks for the update. Yes, this is too bad. I think the need for something like this feature is there; perhaps someone (MaDa?) will find a general solution. – DrewAdams 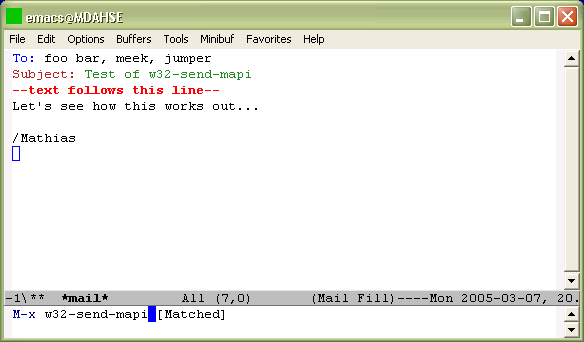 Some seconds after executing w32-send-mapi: 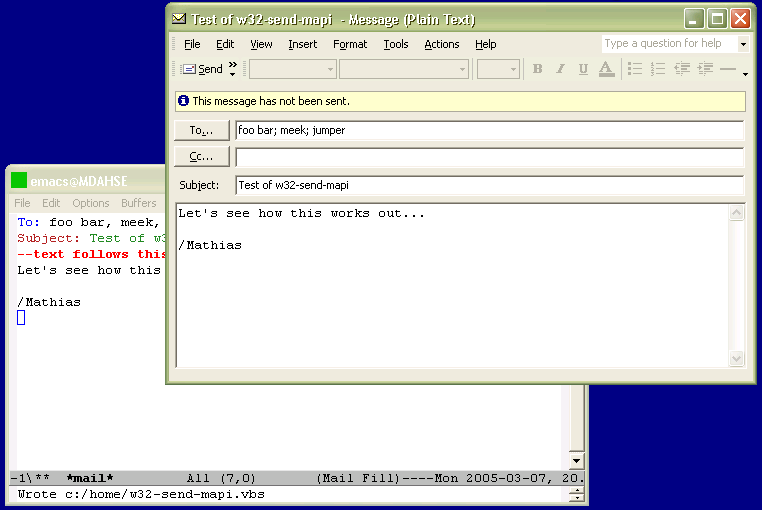 Maybe the wrong place for this, but what the heck:

I have tested w32-send-mapi.el, specifically, with the following MUAs:

Maybe someone can verify other MUAs?