Use the ‘convert’ program from ImageMagick [1] to:

The thumbs page at Savannah at: http://savannah.nongnu.org/projects/thumbs/ will no longer be maintained as GIT:thumbs.el will be part of emacs.

The more recent version can be found on the ElispArea as Lisp:thumbs.el

Information about thumbs.el in japanese

Also see Tumme which is more actively developed, provide approximately the same functionality (and more) and comes with Emacs 22.

NOTE: The more recent version of thumbs in it’s xemacs version exist but have not been tested. I dont want to maintain it. If you are volunteer to do so, please tell me.

will prompt you for a directory name (defaulting to the current one).

In dired, C-t m will pop a thumbs directory with the marked files. 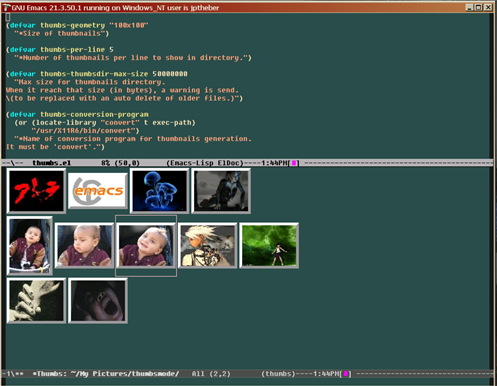 I had to make a change to get this to work on Windows. The function thumbs-thumbname tried to make a filename that looked like ‘c:pathtofilethenfilename’ which didnt’ work. I changed it to the following and it worked great. – RyanBowman

I tried an alternate change after running into and debugging the same problem (should have looked here first!). – RobDavenport

Ryan’s is probably the better solution.