MultiTerm is a mode based on term.el, for managing multiple terminal buffers in Emacs.

Why the need for multi-term.el ?

By default, term.el provides a great terminal emulator in Emacs. But I have some troubles with term-mode:

And multi-term.el is enhanced with those features.

I found that some some people like to run emacs-within-emacs by calling “emacs -nw” inside a multi-term.el (though surely this is just for bragging rights!). However, by default the prefix keys “C-x” and “C-c” are unbound by multi-term (that is, they are processed by the host Emacs). But this means that you can’t quit your nested emacs session with “C-x C-c”. If if you want to do this, remove “C-x” and “C-c” from option ‘term-unbind-key-list’, and remove “C-c C-c” from the option ‘term-bind-key-alist’.

You may have to experiment to get the behavior you want.

All options below can be customized by: M-x RET customize-group RET multi-term RET .

“multi-term-program” default is nil, so when create a new terminal buffer, it will try to take the shell path from an environment variable (“SHELL”, “ESHELL”, and finally default to “/bin/sh”). If you failed to create a terminal buffer, make sure setup this option with a valid shell program.

“multi-term-default-dir” default is “~/”. This is only used when the current buffer is not in a real directory.

“multi-term-buffer-name” is the base name of terminal buffer, with format *terminal<index>*.

“multi-term-switch-after-close” try to switch to another ‘multi-term’ buffer after closing the current one. If you don’t like this feature just set it with nil.

The keystroke list to unbind when terminal is created.
The format is ‘(“KEY-A” “KEY-B” “KEY-C”)

“multi-term-dedicated-window-height” is the height of the dedicated terminal window.

“multi-term-dedicated-max-window-height” is the maximum height limit for the dedicated terminal window.

Have many people asked “How to setup color of multi-term?”, option ‘term-default-bg-color’ and ‘term-default-fg-color’ control foreground color and background color, so just setup like below:

The plain old ‘term’ command never creates a new term buffer, if one already exists. On the other hand, ‘multi-term’ always creates a new one. Both behaviors are limiting when it comes to keybindings. For most of the time, when a user presses a button to get himself a terminal, he expects one he was working with before (otherwise he would probably close it earlier), but sometimes he wants a fresh new one. The following code either switches to the term buffer used last or creates a new one, if a term buffer is already selected. 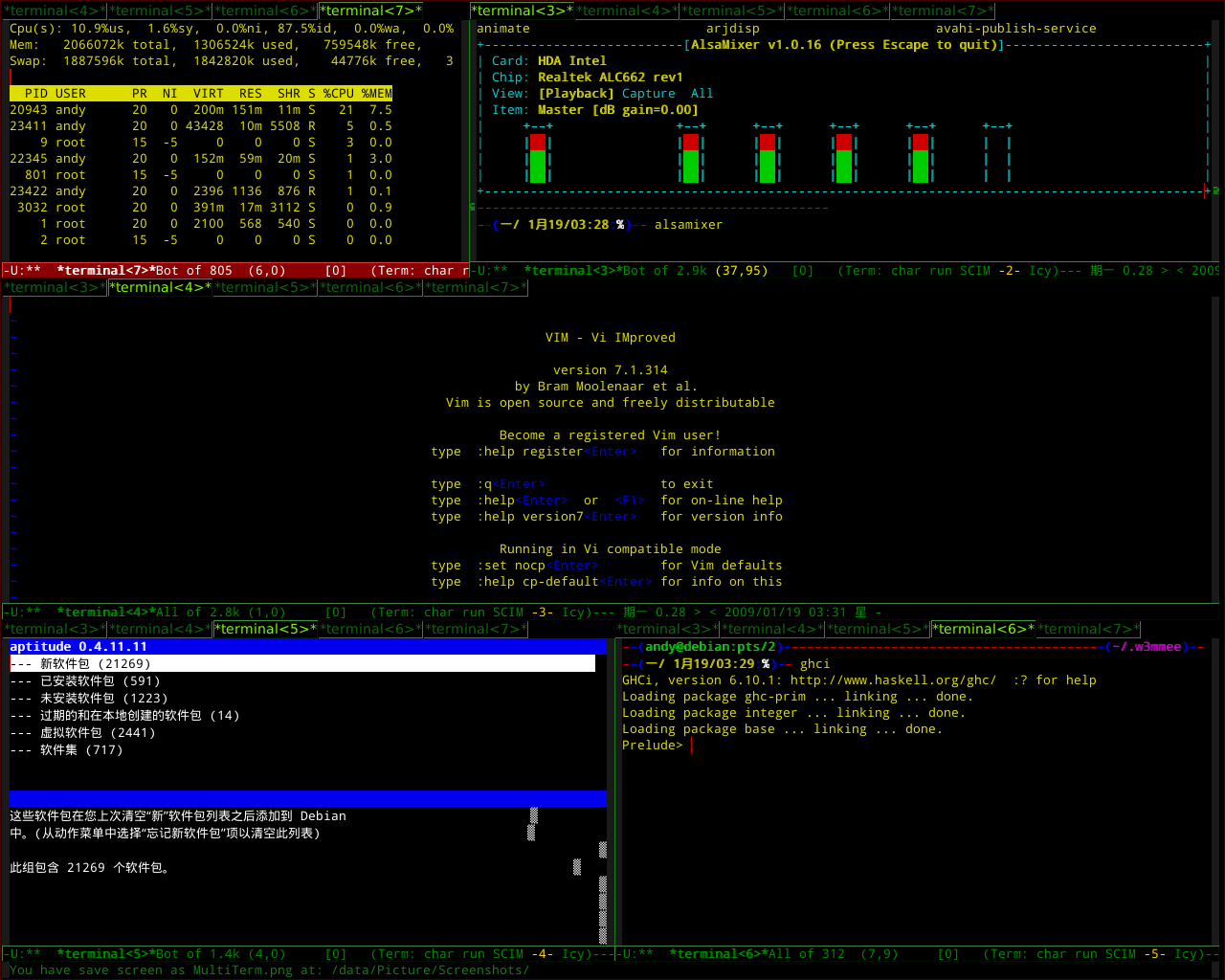 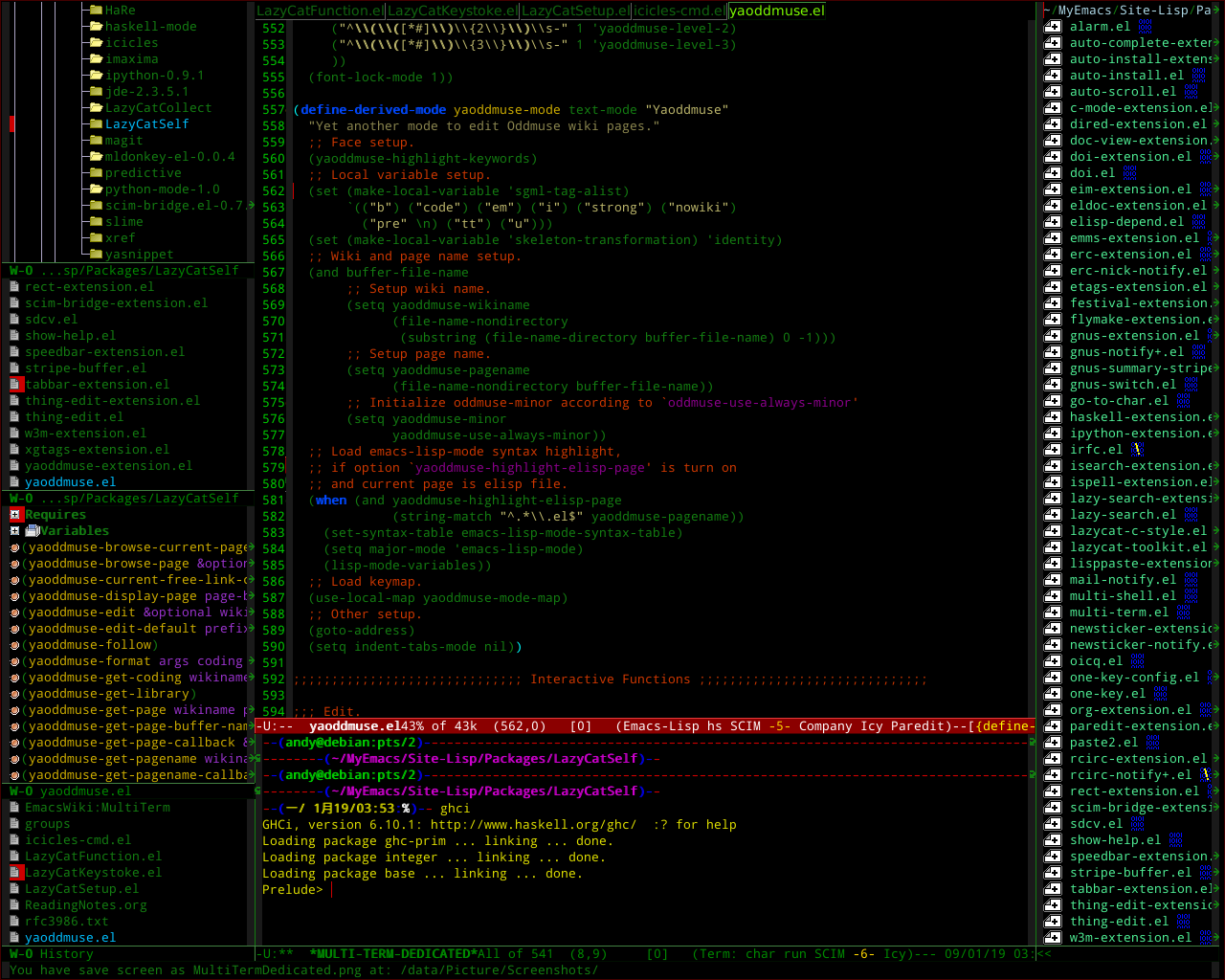 Please write at below if you have any suggestion or bug, or mail to me. Thanks! – AndyStewart

Hi Andy. Thank you for a great mode. I love it and now use it all the time. However I found one deficiency:

- When I am done I run (multi-term-dedicated-toggle) again to get rid of the terminal. At this point I’d like the cursor return to the position it was before I opened the dedicated terminal window. However If I had more than one buffer, the cursor doesn’t always return back to the old position. I worked around it with this (this is my first lisp function; sorry if it is not pretty):

It may be a good idea to add this functionality to multi-term.el

After multi-term.el 0.8.13 , you just need use below code to make you happy: – AndyStewart

Ilya - you might watch to use select-window and selected-window rather than switching buffers when you restore state. —MPH

Sorry Ilya, i have LeaveEmacs , haven’t time write any elisp code even i really want help you. So sorry.

Hi! it seems pretty cool. I used to run M-x shell in my emacs and play a lot of my daily job in it. But I found that in the terminal mode I just not able to send a Ctrl-r charactor to my shell. You know it used to invoke a (reverse-i-search) in bash command history. Anytime when I type C-r in the terminal it just invoke (isearch-backward) in Emacs, even when I type C-q C-r. I can unset the default key binding on C-r in Emacs, but it seems not work for terminal mode. Then I made a term-mode-hook and it really runs, but the key binding of C-r is still there. It’s quite strange.

Of course I can copy a ^R charactor from somewhere else and paste it into terminal window, it really works but it’s too annoying. Does anybody has good idea?

Try type M-r i think that’s your need. 😊
Because C-r is default keystroke for isearch-backward, for avoid conflict with C-r, i binding M-r to send “C-r” character to shell.
You can use option term-bind-key-alist/term-unbind-key-list to binding/unbinding special keystroke in multi-term.el, and don’t use term-mode-hook. 😊 – AndyStewart

Hi. I’m wondering how I can get the ESC key to forward on an actual terminal escape (C-[) to the shell process. Currently it’s being interpreted as meta. Since I am able to actually successfully press the meta key on my own, I don’t need ESC to duplicate that functionality. I’ve tried removing “<ESC>” from term-unbind-key-list, but still when I hit the ESC key, it’s being used by Emacs.

May be the following code will help you.

Then use a convenient key to send ESC to terminal. I am fine with “C-c C-e”

Hi Andy - thanks for multiterm 😊 I’m experiencing an odd issue in FreeBSD, which seems shell-independent (happens with sh and zsh). On Linux, if I change directory inside a multi-term, that changes the default directory for the containing buffer in Emacs. So I can cd into a directory in a multiterm, then do a find-file-in-project and it’ll run from the directory I’ve changed into. On FreeBSD that doesn’t happen; the default directory for the buffer remains unchanged after issuing a cd inside multiterm.

What’s the dedicated-open for? -Mike