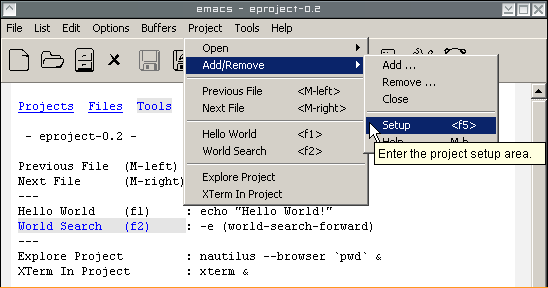 The project menu, shown over the setup area where it can be edited on the fly.

Basically eproject manages a list of projects, where a project is a list of files and a list of commands and is associated with a directory.

If you open a project you get a menu with the files and it will load the last viewed one.

You also get a menu for tool commands that can be fired with one mouse-click or a keystroke. (can be just “make” but as well anything else, typically stuff that you would not want to remember when you revisit a project after some months)

Switching projects is easy and fast, two mouse clicks or three keystrokes. You can do something in one project, then switch to another, do something there, and then switch back as if you’d never left.

eproject has a text menu (“setup area”) where you can quick search an item (e.g. file) by pressing the first letter(s). It works on terminals too.

All lists can be edited on the fly in the setup area. The data itself is stored per project in a file “eproject.cfg”. The project list is stored in “~/.emacs.d/eproject.lst”.

eproject was tested with Emacs 23, it might work with late Emacs 22. To load eproject, add this line to your ~/.emacs:

eproject is at http://repo.or.cz/w/eproject.git. Constructive suggestions and patches are welcome to be pushed on the “mob” branch there:

Where “your-branch” should be based on the remote mob branch. (See also http://repo.or.cz/h/mob.html)

I have created a pair of sources for integrating Anything with eproject, available here:

(Note that this eproject is completely unrelated to another eproject, http://wiki.github.com/jrockway/eproject/. FWIW, I had the name first. :) — Jonathan Rockway) — (Yep, same first name but unrelated. :) — grischka)